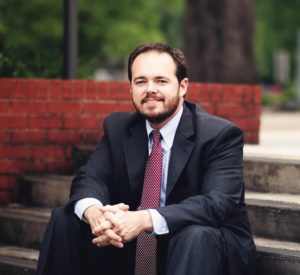 Aubrey Neeley was born in Florence, Alabama but was raised mostly in Atlanta, Georgia. He attended the University of Georgia on scholarship, graduating in just three and a half years. At Georgia, he was on the Dean’s List every semester while also gaining valuable experience working at the University’s Office of Legal Affairs. Aubrey graduated from the University of Georgia in 2002 with a degree in Political Science and a minor in Spanish.

He then attended the University of Alabama School of Law, graduating in 2006. While at Alabama, he participated in the Civil Law Clinic and the Sports & Entertainment Law Society. He also volunteered as a translator with the Tuscaloosa County Public Defender’s Office. Before graduating, Aubrey clerked with law firms throughout Atlanta, working on cases involving insurance defense, mortgage fraud, and white collar crime.

Aubrey was admitted to the Georgia Bar in 2006 and focused on real estate law and electronic discovery issues before moving to Fort Payne and joining the Alabama State Bar in 2012. Today, Aubrey’s practice focuses on domestic relations matters including divorce, modifications, child support, adoptions and DHR proceedings, as well as both defendants and plaintiffs in civil litigation proceedings. Aubrey lives in Fort Payne with his wife, Tamara, and his daughters, Braelyn and Finley. He enjoys spending time with his family and suffering through season after season of Georgia Bulldog football.