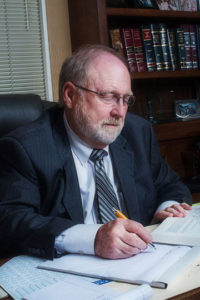 W. N. “Rocky” Watson was born in Tuscaloosa, Alabama while his father was attending law school following the end of World War II. Raised in DeKalb County, Alabama, Rocky graduated from Fort Payne High School in 1967. After completing his studies at Auburn University in 1971, Rocky attended the University of Alabama School of Law on a scholarship, graduating fourth in his class in 1974.

While attending law school, Rocky participated in the John A. Campbell Moot Court Board, and served as chairman of the Board during the 1973­ – 1974 academic year. Rocky was also selected to the Order of the Coif and the Order of Barristers.

Rocky entered private practice with his father in 1974. W. W. Watson had been practicing since 1950 in Fort Payne, Alabama, and Rocky and his father continued to practice together until his father’s death in 1994. In the years that followed, Rocky participated in the formation of the firm of Watson, Gillis & Carver, alongside attorneys Terry Gillis and Sheri Carver. After his daughter and son-­in­-law joined the firm in 2011, the firm’s name was changed to Watson & Neeley, LLC.

After having served two years as the President of the DeKalb County Bar Association in the late 1970s, Rocky became active with the Alabama State Bar Association. He served one year as the Bar Commissioner from the Ninth Judicial Circuit (1986-­1987) while William D. (Bill) Scruggs vacated that seat to serve as President. Upon Bill’s retirement as a Bar Commissioner in 1993, Rocky served an additional ten year stint as Commissioner of the Ninth Judicial Circuit (1993-­2003). Rocky returned to the Bar Commission in 2006, and has also served on the Court of the Judiciary.

Rocky is married to Donna M. Watson and they have three children, Alyson, Tamara, and Derek. He also has five delightful grandchildren.